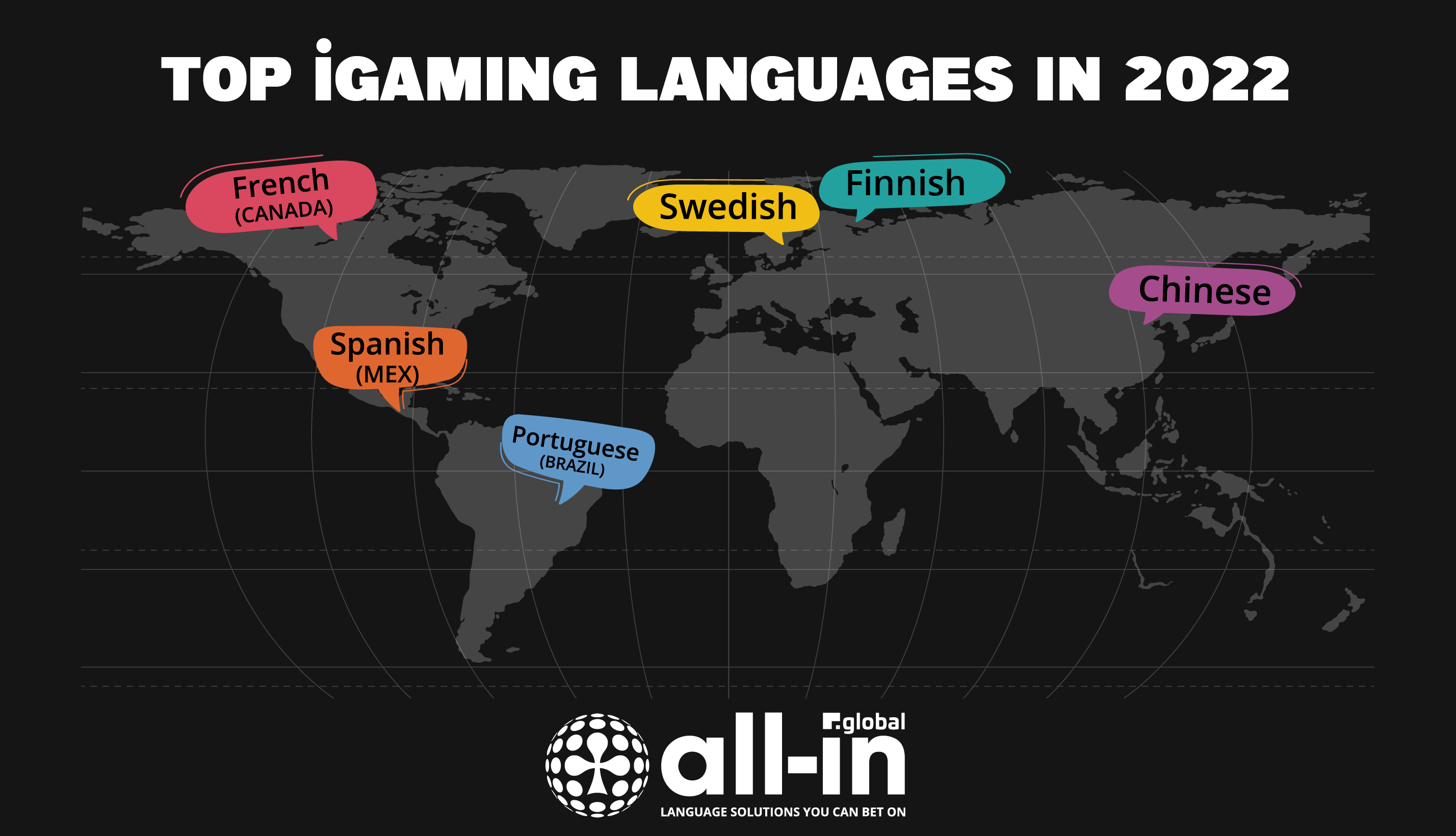 2022 iGAMING MARKETS AND LANGUAGES IN REVIEW

All-in Global had a record-breaking 2022. What can decision-makers in the iGaming industry learn about iGaming markets and languages from our data and considerations?

War, inflation and a recurring pandemic… what a time to be alive. But apparently, it’s not enough to put as much as a dent in the global online gambling industry. According to thebusinessresearchcompany.com it grew 10.4% from $73.42 billion in 2021 to $81.08 billion in 2022.

All-in Global takes its social responsibility seriously, and in 2022 we made several donations including one to an organisation that helps Ukrainian refugees.

The world may be changing but some things don’t change and 100% of our business is still made up ofselling translation and content writing services to the iGaming industry, and a growth there is obviously positive for our bottom line.

We surpassed our previous all-time high annual revenue by as soon as September and with a good October and a SPECTACLUAR November we could confirm it really was a  great 2022 and we rewarded our fantastic staff with a trip to the Azores in May. This trip added to an action-packed 2023 iGaming event calendar for us: 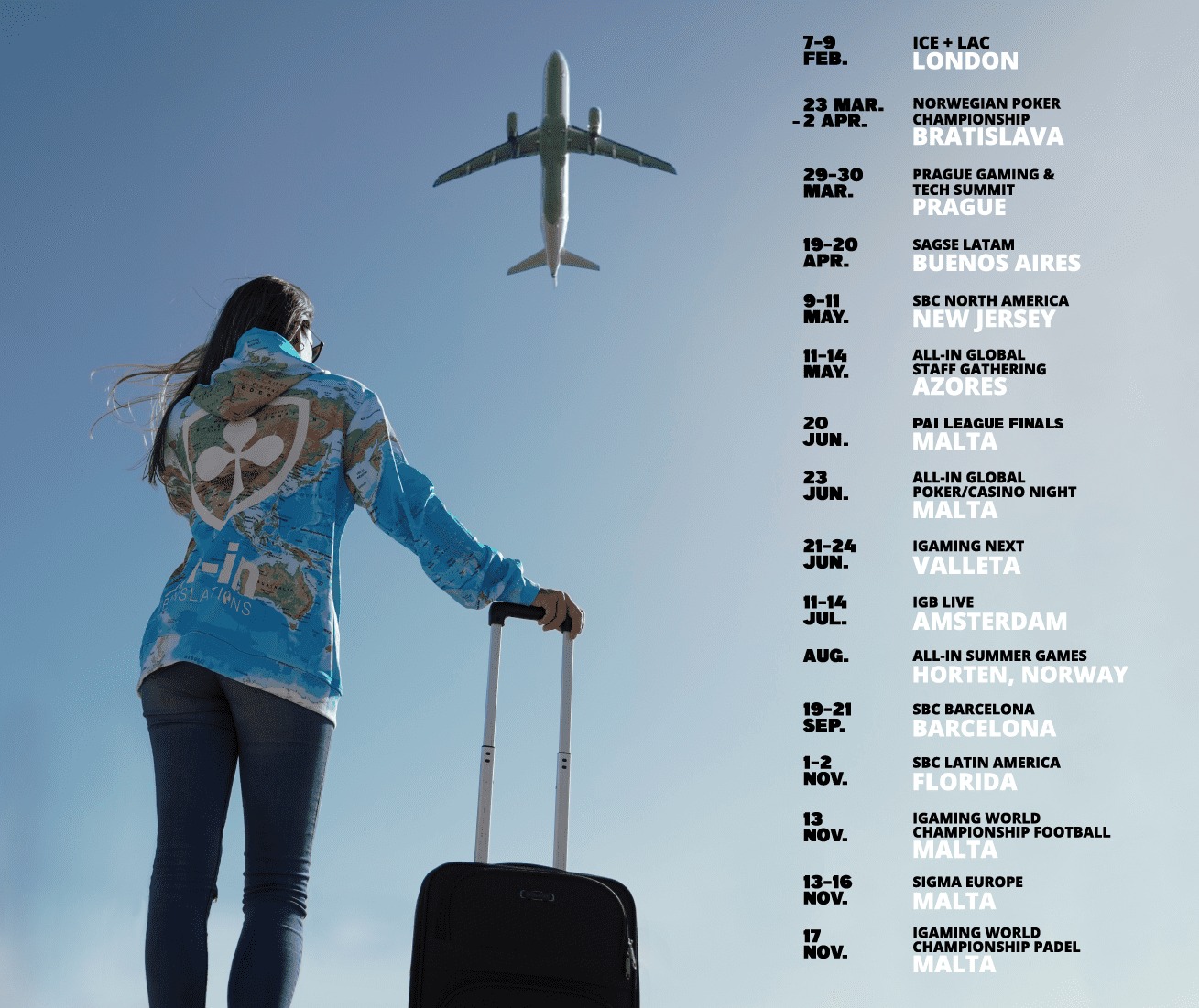 Let’s start with the most relevant data: the top 2022 languages of All-in Global. As the first company to specialise in translation services specifically for the iGaming industry, and currently working with several hundred operators, game developers, platform providers and affiliates across the casino, sports betting, poker and mobile gaming verticals, we believe that this data represents an interesting view on the market.

We have two different sets of data here: one where the top languages are ranked by number of words and one where top languages are ranked by the number of projects. There are big differences in play here, so we decided to include both. We have counted up until mid-December, so we are looking at the full year, minus the last two weeks of 2022. Below each table we will briefly discuss some factors behind the numbers.

Scandinavian languages have always been important for All-in Global and the Swedish, Finnish and Norwegian markets are widely considered as the most lucrative when it comes to total spend per player.

According to an overview published by InsiderMonkey however, none of these countries are in the top 5 when it comes to Total Gambling Gross Revenue. Here we find the UK in fifth, then Italy, Japan, China and the USA in the top position.

English to Italian iGaming translations just made it into the Top 20 of our list.

It’s a bit of a surprise to find French Canadian in fourth but it obviously has a connection to the new legislation as of April 2022 which enabled online gaming providers to get licensed by the Alcohol and Gaming Commission so they could provide their services in the province of Ontario.

2022 was a year when the focus on markets in South America really paid off for many iGaming companies and we are clearly seeing the result of that with Mexican Spanish in third and Brazilian Portuguese in fifth.

As you probably know, there are considerable regional differences between the Spanish-speaking countries in Latin America, but for the record, the most popular variant used for localization is Mexican Spanish.

If you want to know more about how we can help with your iGaming content in Latin American, email salesteam@all-in.global. You can also read our blog post about languages in the Copa America here.

We’ve decided to step up our game in Latin America in 2023 and we will send representatives to both SAGSE LATAM in Buenos Aires in April and SBC Latin America in Florida in November (in addition to SBC North America in New Jersey in May).

We should also mention that our Head of Innovation Jose Uribe is from Colombia. One of his main responsibilities is using technology to make life easier for our clients. In this picturesque and partly subaquatic video, he compares his passion for freediving with the ‘aha moment’ of finding the perfect solution for a client.

When we look at the number of projects for translation from English into other iGaming languages, we see Simplified Chinese leading the field. The online gambling market size in China reached $9.2 billion in 2021 and it is expected to reach $14.7 billion by 2027, so it seems like a sure bet that companies will keep investing in this market. We are well prepared though, with a good bunch of the best English to Simplified Chinese gaming translators in the world already on our payroll.

The remaining nine languages on the Top 10 list are all European, with French, Danish and Dutch in a close race for second spot. We are happy to see our recruitment and marketing efforts in Asia in the previous years paying off, with four Asian languages among the Top 20, including Japanese, Thai and Korean.

The content writing service of All-in Global continues to grow steadily. More and more companies are seing the advantages of outsourcing content writing and thus getting guaranteed high quality and peace of mind, rather than burdening their customer support and/or marketing staff with this task or going down the uncertain road of managing external writers themselves.

The approach of All-in Global has always been to write content that reads well, rather than just quickly throwing together some words and hope that it ranks well.

English remained the biggest language in the world in 2022 and the list of our most popular languages for iGaming content writing projects reflects this. In addition to “regular” English, you can see that US English, UK English and Canadian English are each featured in the Top 20 list. We have spent more than a decade recruiting the best English iGaming writers, who are all experts on our favourite subjects like casino, sports betting, FinTech and mobile gaming.

With Finnish in second, Dutch in third, Swedish in fourth, Belgian French in fifth, Norwegian in sixth and Danish in seventh, I think there is a pretty obvious reason behind why these languages are all in high demand at All-in Global. They are all “high-cost languages” and for content writing we operate with the same base rate for all languages, meaning it’s very cost-efficient to outsource these languages to us.

Did you know we charge per word? Let’s just say that’s not a great deal for us when some Finnish words are written, like Lentokonesuihkuturbiinimoottoriapumekaanikkoaliupseerioppilas!

But then again, we generally write about iGaming, and not so much about airplane jet turbine engine auxiliary mechanic non-commissioned officer students. 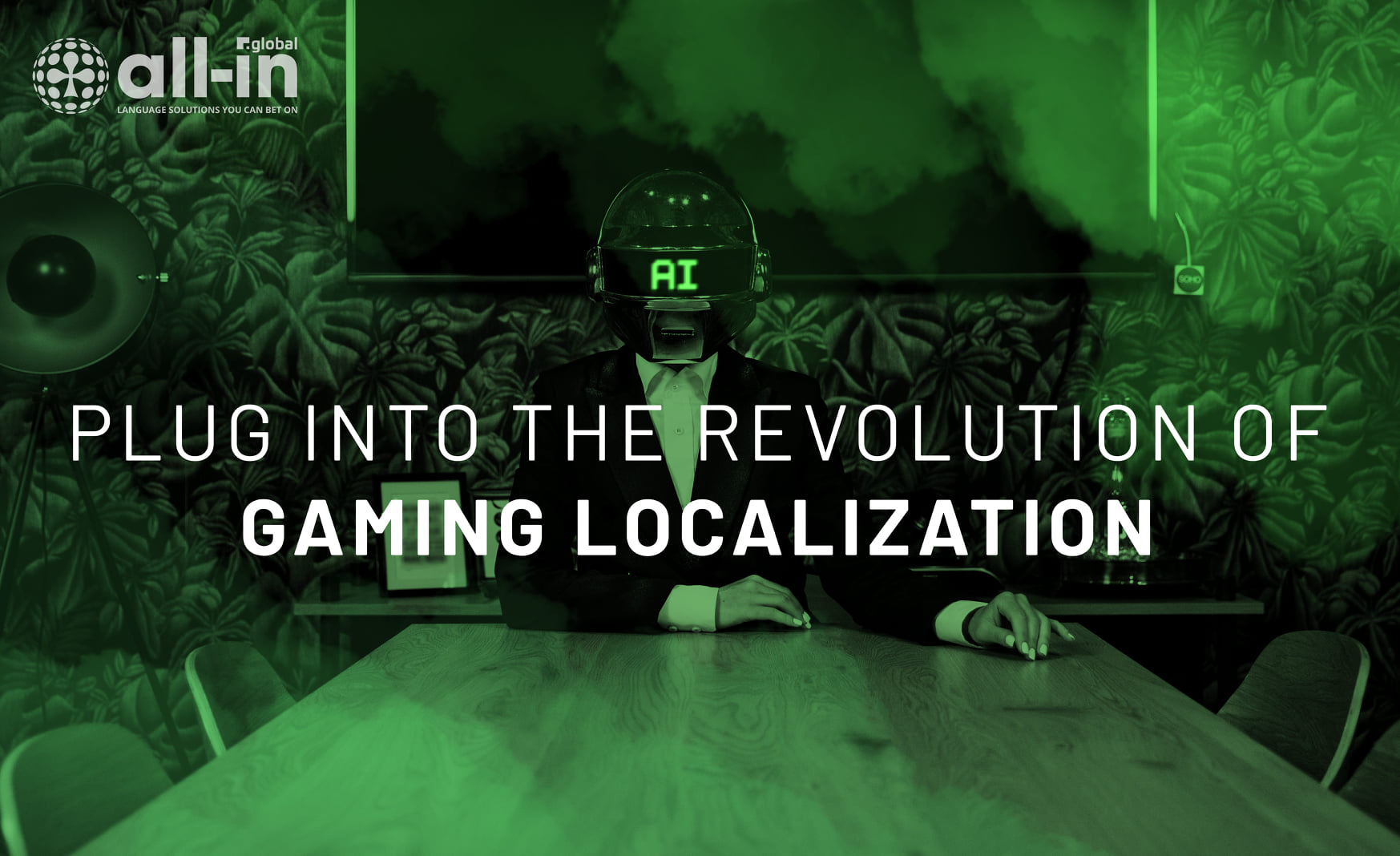 There’s an obvious logic behind this increasing demand. All AI translations get verified and edited by our world-class human iGaming translators and go through a comprehensive QA check before delivery. The cost is around 40% cheaper and the workflow is around 40% faster when compared to a human-only localization process. But there’s more.

Much like human translation volumes, we see that demand for Nordic languages is also high with AI, closely followed by Brazilian Portuguese and French Canadian.

Just like with human translations, we’ve seen a big increase in demand for AI Latin American languages, surpassing Swedish for the first time.

With our plug-in features such as API’s interconnectable with pretty much any CMS, TMS or Platform, you can benefit from an automated workflow. That’s more free time for you to focus on your core business. Happy Holidays! 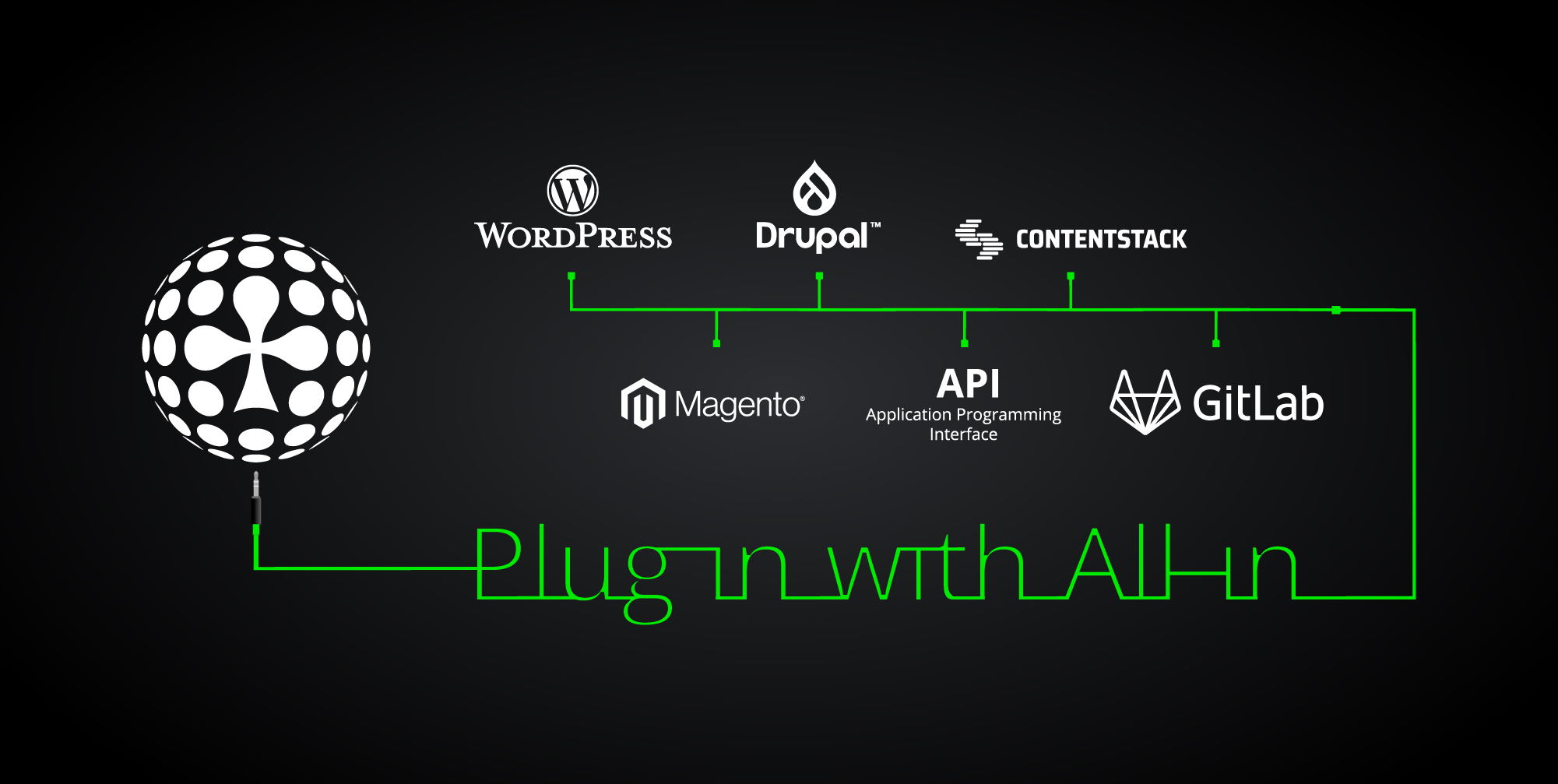 
3 thoughts on “2022 iGAMING MARKETS AND LANGUAGES IN REVIEW”