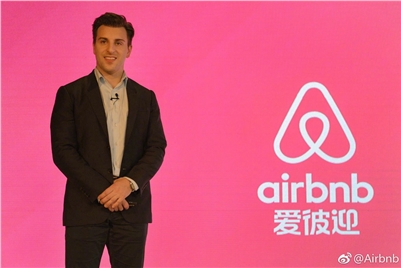 SWING AND A MISS AS AIRBNB "LOCALIZES" INTO CHINESE

Airbnb is one of our favorite websites, but we wish they would have consulted with us before trying to localize their brand for the Chinese market.

“The combination of the words and colours chosen make it sound like they are selling sex toys, condoms or even pornography,”

In this article she discusses how Airbnb failed and why it pays to pay for expert translators and cultural advisors when localizing content into foreign languages.
While Airbnb claims their Chinese name 愛彼迎 (aibiying), which attempts to sound similar to the original English, means ‘to welcome each other with love’, these three words together in Chinese actually sound very awkward. No native Chinese speaker would be able to understand it. Trying to be clever is one thing, but being totally off the mark is another.
Not surprisingly, the general populace of China has shown very little love for the name, and took to the internet to give Aibiying a roasting rather than a warm welcome. Criticism was leveled at the new Chinese entry on a number of scores, including that the name just sounded ‘weird’. People also came up with suggestions for a better-sounding and more meaningful name, and one can only wonder at exactly how much research went into finalizing Airbnb’s Chinese name in the first place. Or whether they did all they could with testing it in focus groups, as one might consider with such a big global brand.

Another issue for Chinese commentators was the predominant colour used in the launch event – a deep pink/purple. These colours work well for a client of ours – CondomOutlet – but when Airbnb chose these colours (together with the translation), many noted that it was synonymous with the marketing of sex toys and even pornography. Not exactly the homely concept they were aiming for, perhaps? (The use of colour, which has restrictions and taboos in traditional cultural contexts is another minefield for marketers, but that is an entire subject on its own.)

Did Airbnb exercise due diligence in appointing the best language consultants to come up with a perfect name for the Chinese market? The jury is still out on that one. Besides, a global company such as Airbnb would have many more obstacles to negotiate in the Chinese market than just an unpopular name. Competition with already well-established local businesses who have copied the Airbnb model, and growing the accommodation-sharing market in a culture that hasn’t yet fully embraced the concept are rather more pressing issues perhaps.
Still, we’d like to think that a spot-on name for Aibiying might have helped smooth the way for a more successful venture into China. Ultimately, the target market must be able to relate to the brand name or else it doesn’t matter how creative the name is, it’s just not going to work. This is why it always makes good sense to get professional input in the early stages from those who really know the market/culture.
[articlequote text=”To be given a bad name is worse than to be born with a bad fate.
– Chinese proverb”] So what’s in a name?… There’s always a risk when international brands launch in non-English- speaking countries with very different traditions and culture. There are so many instances of faux pas in this arena that one could easily fill a book on the subject. While this would no doubt provide some good comic entertainment for the reader, the companies that committed these errors had to learn the hard way.
Lack of cultural awareness and ignorance of the target language is just one way in which a brand could find itself in trouble. Even when a brand name is retained in its original language, there could be unexpected and unwelcome consequences, like the Ford motor company experienced when it launched its Pinto model in Brazil. While ‘pinto’ is a type of horse – an appropriate simile for a car, in Brazilian Portuguese the unfortunate homophone was understood as a slang term for ‘small male genitals’.
Mercedes Benz’s foray into the Chinese market nearly crashed in spectacular fashion when it first launched as ‘Bensi’ – which could translate as ‘rush to your death’. Microsoft, on the other hand, was better prepared when it launched its search engine Bing in China. In Chinese, the character pronounced ‘bing’ is associated with concepts such as ‘disease’ or ‘virus’ – pretty much deathly for anything computer-related. However, a little twist of the name to Bi ying – still recognizable – changed the meaning to something like ‘responds without fail’.
How one little syllable can change a massive negative to a remarkable positive – or vice versa – is indicative of the many challenges and pitfalls which global companies face in attempting break into the Chinese market. With a population of over 1.3 billion in a geographically, linguistically and culturally diverse country, China is a tough nut to crack.
Successfully launching and integrating a product or service, and communicating effectively with Chinese consumers, requires the professional services of highly qualified Chinese translators who understand the nuances of Chinese culture and language in all its complexity, as well as being fluent in the original language of the marketer.
Chinese trade laws require that brands must be ‘translated’ into a Chinese equivalent. And obviously this is also necessary to appeal to local consumers. There are a few ways to do this, and here are some of the more popular options:
1: Phonetic match only: Sounds similar but no correlated meaning, such as McDonald’s – mài dāng láo (‘wheat serve as labor’), a fairly nonsensical literal meaning, or Cadillac (Ka di la ke), the sounds of which have no meaning at all in Chinese.
2: Semantic match only: The Chinese name is a faithful translation of the original meaning, but does not sound similar. For example, Volkswagen – Da Zhong Qi Che, meaning ‘people’s car’ (from the original German).
3: Phonetic and semantic match: Famously achieved by, among others, Coca-Cola (kě kǒu kě lè) which means something like ‘tasty fun’.
4: No match to the original name: Localizing the brand with an entirely original name, as Pizza Hut did, launching in China as ‘Bìshèngkè’ which might mean something like ‘compelling victory for guests’.
So, getting back to Airbnb, these are the choices they faced breaking into a difficult but potentially lucrative Chinese market. We can assume that they aimed for the third option listed above, but unfortunately didn’t quite make it to first base with their effort, let alone scoring a home run. As language consultants we think that a name, or a slogan – even the words used in every form of communication – are extremely important. And there is arguably no country where words carry more weight than China.
Disclaimer: All-in Translations uses Airbnb on a regular basis when we travel around on our Celebration of Translations for All Nations Tour. Usually, we’re sending a team of 3 or more delegates, and in those cases Airbnb offers much better value than hotels. We also find that we get to experience more of the local culture when staying in someone’s home. With that said, we genuinely wish Airbnb the best of luck wherever they set up shop!
PS: If someone from the localization team of Airbnb (or anyone else for that matter) reads this and decides they want us to help them with translation or content writing, they can get a free quote here or reach out in the live chat or drop an email to michele@allintranslations.com. We specialise in iGaming and gambling, but our skills would be a good fit for a more “general” brand like Airbnb as well.
Below some examples of when we used Airbnb:
… when All-in Translations had a workshop at an Airbnb house on an island without roads outside of Oslo:

… when All-in Translations shot a promotional video together with Calvin Ayre Gambling News in an Airbnb penthouse in London during ICE Totally Gaming:

…in the Airbnb apartment in Amsterdam where All-in Translations will relax with a game of chess after long days at iGaming Supershow in July: