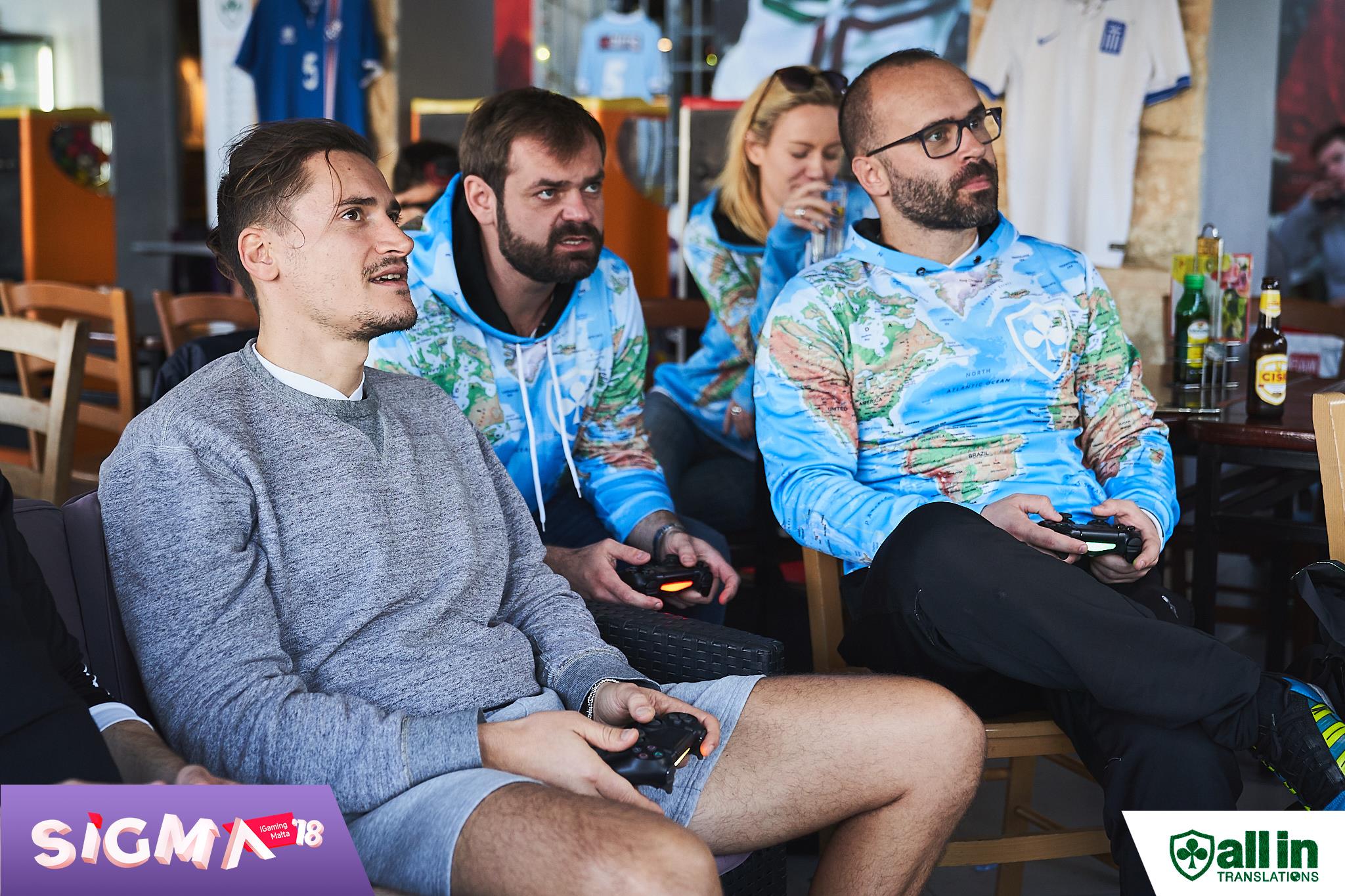 HOW THE BEAUTIFUL DIGITAL GAME CAME TO LIFE AT SIGMA CUP

O jogo bonito. The beautiful game. The origin of this phrase is may be disputed, with both Pelé, Waldyr Pereira (Didi), Stuart Hall and H. E. Bates being mentioned as possible authors, but it is widely recognized as an accurate description of football.

So, what is the most bonito moment?

For the CEO of All-in Translations, Tiago Aprigio, one of them belongs to Maradona. He likes to talk about “El Pibe de Oro” when describing how we work. He says: “With All-in Translations, the way to your goal is as straightforward as Maradona’s goal against England in 1986. Our translators and writers will be your best players, managed by the best project management team in the industry“. Winning the SBC Award for Best Service Provider 2018 solidly supports his statement, but for me a solo goal could never be the most beautiful moment in football. It always has to be a team effort in my view, a tactical masterpiece, a beautifully orchestrated counter-attack by the underdog in the 87th minute, when the favourite is pressing and the score is 0-0. One of these magical moments unveiled in front of my eyes on the first day of the Malta-based SIGMA conference recently, when All-in Translations organised a football tournament for 25 gaming companies at Luxol Sports Club. The whole event was a symphonic example of everything that is bonito about the beautiful game. Teamwork, tactics and togetherness played key roles. I will get back to this, but the show’s superstar was a digital innovation. Have you ever played Premier League Fantasy? Me too. This is not a new game, but thanks to the platform provided by Scout Gaming Group, we could make a world’s first: a fantasy league connected to a gaming event. So we gathered the details of all 200+ players from the 25 teams participating in the SiGMA Cup and assigned them a value based on their skills. Then anyone could enter their own fantasy team by selecting 6 players that did not exceed a certain value in total. The appeal here was, of course, that you could pick your colleagues, your friends, or even yourself, and see how many points your team could scrape together. People got very excited about the game and we have already decided to duplicate it for SiGMA Cup 19.

What impressed me the most about the event was the goodwill shown by so many people and companies. This event is non-profit and free to everyone willing to join, so the aim is to keep the cost to a minimum. Our marketing viewpoint is that it creates much more value to us and the other contributors when we organise positive events like this, rather than when we are just buying media. As the manager of the whole event, it was beautiful to see how all the elements came together. From laying the foundation in “pre-season”, to getting the key players in during the “transfer window” and completing the last few pieces of the puzzle in the teamtalk before kick-off. All these people deserve a mention, so here is the rough timeline:

November 2017. Me: “Should we do this next year as well?” Eman Pulis (SiGMA): “Of course. Never change a winning formula”.

May 2018. “Can we double the capacity and organise a panel discussion and an esports tournament inside the clubhouse?” Nicky Darmanin Demajo and Jason Falzon (Luxol): “Not a problem. Just let us know the details”.

September 2018: “Can you moderate a panel discussion about football in esports and fantasy during SiGMA? Tal Ron: Sounds good! Leave it with me“.

“Should we create a fantasy league based on SiGMA Cup“? Joakim Renman (Scout Gaming Group): “Yes! I will get our team to set this up right away“.

October 2018: “Anyone without a team can join Team Random“. Gonçalo Costa (Costa Rank): “I can manage this. Just send any random players my way“.

“Does anyone want to sponsor a medic for emergencies and some prizes for the winners?” Daniel Graetzer (Carousel Group and Team Random): “How much do you need?“.

November 2018: “Would you like to sponsor an open bar”? Dennis Dyhr-Hansen (Matching Visions): “Where do I sign?“.

“We need 5 referees for November 27th“. Nikola Mraovic (Pentasia All-in League): “When should we be there?“.

“I need someone to organise the PES Esports Tournament. Interested?” Jens Schmieg: As long as I don’t miss any matches for my team in SiGMA Cup, sure.” Not to mention Angelique Muller (video), Aleksandar Bundao (sound) and Sasa Jovanovic (rigging) – great professionals I can always count on.

Just a few days before the event, it starts raining with forecasts of more to come. I would not be worried about that if the event was in Norway, but in Malta I’ve experienced people running away from the pitch in the middle of a game.

0700: Alarm goes off. I look outside. It’s almost sunny. Then I realise I am missing at least 3 fantasy scouts to register goals, clean sheets and bonus points. Damon Booth (BetBanter) and Jakob Vestergaard-Laustsen (previously Mybet) step up and handle it flawlessly the whole day, while Nicolas Morel and Maciej Kwiatek (All-in Translations), Endre Nesset (GIG), Robin Javerud (Game Lounge) came to the rescue as “super-subs”. There were 57 matches to be played. Between matches, we managed to get the results to the data insertion team (Torbjørn Angeltveit and Desmond Fenech from Scout Gaming Group), and the result was something pretty close to live updates. The teamwork was sensational.

By the time the tournament reached the final stages, it became clear that several teams had upped their gameplan this year. GIG – last year’s winners and the only team to play with a “flying” goalkeeper – lost, to everyone’s surprise, to LV Bet. Most teams lay low against GIG, but LV Bet turned things around and played very aggressively, which was a perfect tactic as the GIG players were too tired to move enough after playing the whole day with just one substitute.

Mark Thorne aka Mourinho always fields a good team, and the defensive structure of his Wishmaker pushed them all the way to the final. But against Axl Affiliates it was not enough. Their gaffer Marius Filip had gathered an impressive team of five-a-side players, and it was well deserved when they lifted the prestigious SiGMA Cup trophy in the end.

Towards the end of the game, the teams got carried away, and there was a bit of a rough-up which continued after the match was over. Carl Ahlvik, the goalkeeper of Wishmaker, had just lost his 3rd final in a row and he and his teammates reacted to what they called mockery of one of their players. So, when I saw Ahlvik and Filip shake hands and smile inside the clubhouse half an hour later, it was the perfect conclusion to a beautiful day of football. There are two things I’d like to improve for next year’s SiGMA Cup:

1: We should get women involved. As far as I saw, Sacha Kinser of Game Lounge was the only female to play this year. She did great, and it would be fantastic to see a game between the women footballers of the gaming industry next year. 2: The fantasy game needs to go even more digital, and the scouts should be able to insert the data directly into the system while watching the games.

What’s next? At All-in Translations, we intend to continue creating events for the gaming industry. It’s our way of showing everyone that we walk the walk.

On March 20th, we will be organising the official poker tournament of the ASEAN Gaming Summit in Manila, and we are working on organising a baseball event on April 23rd in New York (1st day of the Betting on Sports America conference).

Also don’t get surprised if you receive an invitation to a PMS (Pre Match Session) for one of the games in Group F where Spain, Sweden, Norway, Romania, Faroe Islands and Malta are battling it out for a place in Euro 20.