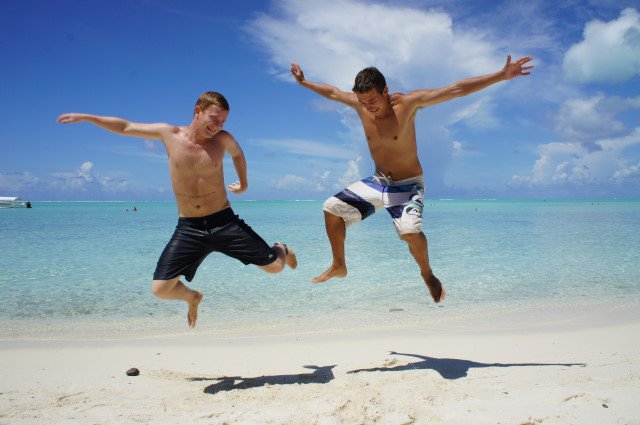 CAREER PATHS TO PURSUE WHEN TRAVELING IS LIFE

Remote employment and flexibility are trending. Here are my career tips based on 20 years of meeting nomads, starting with my own story.

Some of the remote workforce are pushed to work from home because their employer is cutting costs without renting an office, but some are also choosing a life on the road because of their love for traveling. So what are the career paths or skills to pursue when you want to live and work in a place where people normally come for a holiday?

Ever since my first train trip around Europe in 1998, I get ants in my pants whenever I stay more than 2 months in the same place. I have always adjusted my life with traveling as a priority. After my first trip as a backpacker in Southeast Asia in 2002, I set the goal of being able to work whenever and from wherever I want. Life as a sports journalist in Norway was not my cup of tea, and when in 2005 I got a job offer from a gaming company in Malta, I jumped on it. The tasks of a Norwegian customer support representative were repetitive, the salary did not cover my active nightlife, and I failed to enjoy the predictability of normal working hours, but at least it wasn’t cold and gloomy. Slowly but steadily, I managed to get shift work instead, as part of the Swedish customer support team that covered more hours. This suited me better.

After just over a year, I was hired to build the customer support center of a Norwegian poker startup from scratch. But when that company stopped paying my salary because of liquidity issues, I had to look elsewhere for something to pay my bills. It’s when I landed my first remotely-based job, with PokerStars. I was hired as a Norwegian customer support agent, but got promoted to as poker specialist after a while.

My Greek girlfriend, who back then was working in the marketing department of another gaming company, managed to convince her boss to also allow her to work remotely around the same time. All of a sudden we had the freedom of choosing wherever in the world we wanted to live. With rock-scissor-paper, best of three, the winner would decide the continent and the loser would chose the city where we’d live in. I lost – she chose Europe – I chose Barcelona. And before my application to PokerStars for becoming the Norwegian Localization Manager was decided upon, I handed in my resignation so I could put all my chips in one pot and go all-in on the translation company I had been planning to start up.

The dream was that my life as a company owner would allow me to work whenever I felt like it. And despite many periods with work around the clock, I hired great people to help me from early on, which allowed me to have a “workation” in some of the most beautiful and interesting places in the world. You can accuse me of namedropping as much as you want, but as a traveling junkie I put a lot of pride in the list of countries I visited during those years.

It’s safe to say I met many interesting people along the way. Some of them were picking fruit in Australia or bartending in Magaluf in order to finance a few months “on the road”, but this blog post is not about them. This is about career paths or skills travelers can pursue if they want to have the option to work whenever and from wherever they want.

One of the more extreme “cases” we encountered was an English guy who traveled in a tent following the cruise ship his girlfriend was working on. Internet was priced like a luxury product on the islands of the South Pacific back in 2010, but as a hacker he knew how to use a password protected Wi-Fi network without paying the ridiculous price for it. I remember how Internet was one of the biggest expenses of our traveling back then, but our friend managed to tell his girlfriend good night without having to worry about the minutes ticking. Seeking a career in the hacking game is for the fewest of us, I guess, but there could be something for everyone in the professions listed below.

Is there anyone more free than the writer? Or are writers locked up in their own minds? It’s a thin line I guess. There are no real limitations as to where and when you can work when you are a writer, and you can argue that it’s in the writer’s nature to travel extensively. Statistics show that authors, writers, and editors are more likely to be operating their own business than working for someone else. According to this article by studentscholarships.org, 65.9% enjoy the self-employed lifestyle, which, of course, makes it easier to travel.

My wife Elisavet Arkolaki has been by my side on most of the trips. This summer she is releasing her first children’s book – a graffiti illustrated story about multiculti kids. Elisavet, or Liza for short, is fully determined to become a bestselling author, and knowing how stubborn she is, it’s just a matter of time 😉 It feels like the Internet has brought more opportunities for people to make a living as writers, and Liza had her book successfully funded on Kickstarter last year. My writing career started in a time when the printed version of a newspaper had priority, and it always helped me to stay a few more precious days on the road when I sold travel features to the local newspaper. This story about how my home town Horten is mysteriously left out of a map at the Bob Marley Museum in Kingston that shows the Kaya Tour destinations in 1978, is my favorite.

The skills of a good translator lie in the translator’s head, while the tools they use can easily be brought along on a laptop. As long as the deadlines are met, there are very few limitations as to where a translator can work from. There is Wi-Fi pretty much everywhere, and you can get a cheap roaming sim as backup. Different time zones can be a challenge, of course, but nomad translators are experts in dealing with this. To give an example, it’s comfortable to be in a time zone that lies ahead of the time zone where your client operates from – like living in Asia and working for a client in Europe. I remember it was hard working against deadlines when it was the other way around, like translating a poker site and its new casino section for a Malta-based company while traveling around Jamaica. There was no Internet in my room, and I had to spend the night outside next to the modem along with the mosquitoes to get the last words delivered before the sun was to rise in St. Julian’s on the deadline day. I translated the Norwegian version myself, but relied on other translators to complete the translation of this poker and casino website into Swedish, Danish, Finish, Icelandic, German, French, Dutch, Spanish, Portuguese, Italian Polish and Russian. Gaming translators, more than others, are spread out around the world and it was a formidable challenge to manage deliveries at different hours throughout the day.

This was back in the days when the company was a one-man band. Today, our Portugal-based operations team makes sure all the projects run smoothly – both for our clients and for our translators. We’ve worked with more than 400 translators and writers during our 10 years in business, and we take great pride in what we have created together with them.

Working for an NGO

If you like to travel off the beaten path while at the same time making a difference to help those less fortunate, I think working for a non-governmental organisation (NGO) is an interesting choice. Whether the organsiation has a humanitarian mission, or if the aim is to stop animal cruelty, they need people with all sorts of skill sets. My friend Julia Berge studied civil economics and her engagements with different NGOs, like Norwegian Refugee Council, has brought her to more places in Africa than anyone else I know.

The way I understand it, a Destination Manager’s most important job is to show his or her clients a hell-of-a-good time and to avoid tourist traps, often in up-beat places. I see this profession as a high-end travel agent, and I know two people that have this job. One is from my home town, he is the CEO of The Key who specialises in the Norwegian market. The other one is Joel Gilberto. I met him all the way on the other side of the globe in Byron Bay Australia, and he currently runs a successful destination management company called Upbeat Vegas. They helped us organise a client dinner in Las Vegas a few years ago when a lookalike of Zach Galifianakis tagged along for the evening.

Surely this is a job where you can travel from one cool place to another and earn a decent living.

A powerful symbiosis is created when professionals can use their shifting surroundings to practice a skill. Like working as a photographer. Sandra Rogers is a great example. We made her acquaintance in Malta many years ago, and last month she came to visit us in Thailand together with her family. Whenever she brings her camera out, the result is spectacular photos. Sandra specialises in wedding photography, and I think very few career paths could enable you to get paid work in more beautiful places…

… with the exception of a diving instructor job, maybe. Scuba divers want to go where the marine life is at its most colorful, so you will often find expat diving instructors on different paradise islands around the world.

A similar profession, which I suspect is on the rise globally, is gym instructor. In Koh Lanta, Thailand, where I am currently operating from, a Swedish lady called Amalie Junholt arranges training on the beach every morning (except Sundays). What a great way to make a living!

An affiliate is someone who sells traffic on the Internet. For example, someone creating and managing a website about how to win at sportsbetting and then earning money from whatever players wager money at the sportsbooks the affiliate is promoting. The requirement of physical presence is very limited, and as an affiliate you often get a free pass into conferences around the world – which is a good incentive to travel and see more. I don’t know many young people to have traveled more than my 2016 friend of the year Jerry Land. He is now the Vice President of casino software solution provider SkillOnNet, but he used to work on his own as an affiliate. I have many affiliate friends that live a nomadic lifestyle and it’s always a happy occasion whenever our paths cross.

More of a wishful thinking than an actual career tip, but sometimes I can see myself as a football scout, only if I would have studied Law instead of Journalism. I can’t imagine there aren’t many jobs cooler than traveling to the corners of the world to find talented football players. While many agents are indeed lawyers, being a lawyer is not mandatory. If it sounds interesting I suggest you check out this book – it seems kosher.

In 10 years of All-in Translations, we have worked with a lot of people displaying the skills mentioned in this piece. “Flexibility” is one of the most important words in our company ethos. Flexibility, open-mindedness and mutual respect. We are always looking for talented people, so if you think you have what it takes, send an email to hr@allintranslations.com. Also, you can see our job openings here. Get in touch with All-in Translations to boost your international footprint. More than 200 gaming companies worldwide have chosen our solutions to give their businesses a competitive edge.