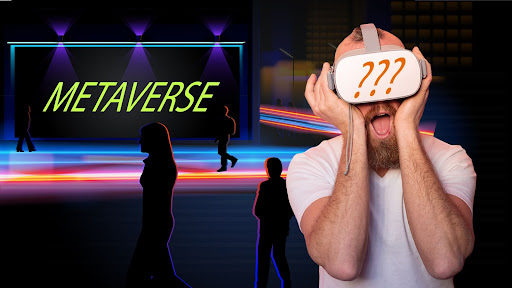 ANSWERS TO THE TOP 10 QUESTIONS ABOUT THE METAVERSE, MULTIVERSE & OMNIVERSE

What is the metaverse? If you don’t know, this post is for you. Scroll down for the top 10 questions about the metaverse and digital reality.

Although it’s crucial to have a better understanding of the world we live in, sometimes it’s hard to stay updated about the latest tech trends. With that in mind, we decided to make it easier for our readers by answering the most asked questions on the internet about this topic. We used the amazing tool answerthepublic.com to discover what has been worrying the net citizens regarding this matter.

1 – Metaverse, multiverse & omniverse, aren’t they all the same?

No, they’re not, and we’ll explain why in an overview below:

The term “metaverse” was coined by Neal Stephenson in his 1992 novel, Snow Crash. The word has since been adopted to describe a system where all forms of reality (physical, virtual, and augmented) are merged.

The Multiverse vs. the Metaverse

The multiverse is a theoretical concept. It’s similar to the one cosmologists talk about when they discuss the many-worlds interpretation of quantum mechanics. The idea is that the multiverse is a collection of independent worlds.

In many ways, the internet is a type of multiverse because, even though everything exists online, there aren’t integral links between different platforms. For example, there’s no real link between an online game and YouTube.

A metaverse is different in that everything is connected within a digital ecosystem. There will be distinct apps and platforms, but they’ll have an integral link i.e. that they’re all part of the same digital world.

The Digital Universe aka the Omniverse

The omniverse is the collection of all metaverses and multiverses. It’s basically the digital universe. Look at it like this: each world is a metaverse. These worlds aren’t intrinsically connected, but they can be part of the same multiverse, much like Earth and Mars are part of the same solar system. The omniverse is the universe within which these solar systems and, therefore, worlds, exist. Who owns the metaverse?

How does the metaverse work?

In technical terms, the metaverse will be a series of apps and platforms within a digital ecosystem. More generally, we can define the metaverse as a virtual meeting place that blurs the lines between all forms of reality, i.e. physical, virtual, and augmented. The overarching idea is that people can connect, interact, and have shared experiences, just as they would in the physical world but via virtual platforms.

How do I enter the metaverse?

This is an ongoing debate. Based on current technology, we’ll find our way into the metaverse via virtual reality (VR) and augmented reality (AR). For example, you’ll be able to don a VR headset, such as Oculus Rift, and connect to Facebook’s Metaverse.

However, we may move beyond external hardware thanks to the development of brain-computer interfaces (BCIs). Elon Musk’s Neuralink is an early example of this technology, which means we could see the metaverse literally implanted in our brains.

What will be in the metaverse?

Almost anything that’s in the physical world could be in the metaverse. Mark Zuckerberg et al want the digital world to become, at least in part, our world. Games, as they often are, will be the starting point. However, the forward thinkers are already imagining virtual meetings, people watching movies in digital theatres, and, eventually, our homes merging with the metaverse.

There may be no limits to what’s possible in the metaverse. As Zuckerberg explains in the video above, his vision is a virtual world that connects people. Thus, we can live large parts of our life in it. By overlaying virtual images onto physical objects, metaverse technology will blur the lines. On top of this, there will be things that can only exist in the metaverse.

This dynamic means that existing services will still be required. Indeed, companies that want their message to be understood by customers in different countries will still require a world-class translation service. Musicians will still need places to perform, and people still need ways to communicate with friends. However, the metaverse will also create new opportunities. Processes can be refined, products can merge, and there will be new ways to experience life.

Will written content still be relevant in the metaverse?

Many thought that the internet would be a death knell for the written world. The opposite was true. Today, the written word is as valuable as it’s ever been. Websites are ranked, in part, by the words they contain. That’s why our translation services are critical for companies that want to stand out in multiple markets, and not just English-speaking countries.

There’s no doubt that the metaverse will bring more depth to the internet. A lot of 2D processes will become 3D which, in turn, opens up the ability to replace words with speech. However, we can’t forget the fact that the physical world isn’t going away.

This is going to be a hybrid reality and, therefore, words still matter. What’s more, they’re probably going to take on a different role, which means written content, in every language, will still be important.

What are metaverse companies and what will they do?

Metaverse companies will build and run the apps we use. They’ll provide digital platforms through which we can play games, chat with friends, project virtual objects onto the physical world around us, and much more.

Naturally, with the metaverse open to the world at large, these companies need to build products that speak to everyone. From English to Chinese, the metaverse needs to be polyglottal so we can all connect.

Is Metaverse the future of work, rest, and play?

Supporters of this brave new digital world believe it will be. Mark Zuckerberg wants the metaverse, or at least Facebook’s version of it, to be a blend of realities. The spaces we move in will remain physical, as will things we hear and touch. However, the things we see will, largely, be digital.

We’ll make payments through digital networks, which is why cryptocurrencies such as Bitcoin will be important. We’ll look at art within the metaverse. Our homes and clothes will be enhanced by digital overlays. Hybridization is, it appears, the future of work, rest, and play.

Is the Metaverse a good thing?

That’s tough to answer because everyone will have their own opinion. Indeed, we could ask, is the internet a good thing? In many ways, it is. However, there are also aspects of it that have had a negative impact on life. The Metaverse will be much the same.

How will the metaverse change the world?

In essence, the metaverse will lift the internet off the page. It will take things we already do online and change them from a 2D experience to a 3D experience. So, while there are certainly major changes ahead, we actually have one foot in the metaverse already. All we have to do now is bring our feet together and leap into a new digital reality.