UK AND US ENGLISH: WHY CALLING IT A CLEAN SHEET DOESN’T WASH ANYMORE

How Trump made his way into the dictionary, why exotic wagers aren’t necessarily struck on white sandy beaches and appreciating that the devil is in the detail when it comes to language. These are the challenges of communicating with Americans and how we can help you overcome them.

Fans of the quintessentially English TV show from the late 90s called ‘I’m Alan Partridge’ will surely recall the one where radio presenter Partridge runs a poll on his radio show asking: who is the better Lord? The Lord of the Rings? Lord of the Flies? Or how about the Lord of the Dance?
If that’s too ridiculous a question to answer, then how about this one: who is the most important Noah? He of the Ark, who did so well to avoid the flood and was the first-ever to do his bit to prevent the extinction of certain animals? Late night South African-born chat host Trevor Noah? Or how about Noah Webster?
It is of course an equally ridiculous question after all and given the first two members of the Noah Club need no introduction, let’s talk about the third one. Spoiler alert: he probably affects all of our lives as English speakers, readers and writers on a daily basis, to a greater or lesser extent.


“AN AMERICAN DICTIONARY OF THE ENGLISH LANGUAGE”


Back in 1806, Webster published the first-ever American-produced dictionary called ‘A Compendious Dictionary of the English Language’. He was so patriotic he went out of his way to create a whole new language as a way of distancing his country from Britain as much as possible.
It’s because of him that we drop the ‘u’ in colour and because of him that an American will write about being ‘at the center of the organization’ whereas the Anglophile writer will change the order of the ‘t’ and ‘e’ in center and replace the ‘z’ in ‘organization’ with an ‘s’ in the time it takes to make a very English cup of tea. 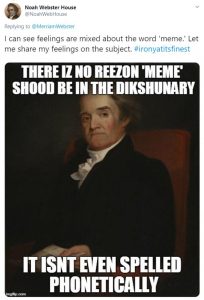 The Merriam-Webster dictionary (no prizes for guessing where the name came from) added more than 600 new words to it in April 2019, ranging from ‘screen time’ to ‘gig economy’ and ‘steaming’, which apparently is what happens when you hit the sauce too hard the night before: a hangover, to you or me.
And we’ll have to wait until the end of Donald Trump’s administration (whenever that is) to decide on what sort of legacy he will have left behind but he’s already left his mark on the dictionary: ‘fake news’ was added to it last April, as well.
And if taking all that into account sounds like hard work, then the waters are further muddied by ever-evolving industries like the gambling one using completely different words altogether.


An ‘exotic wager’ may throw up images of a bet struck on a tropical beach over a pina colada but it’s just what the Americans call a bet placed on the Oscars, X Factor or what the next Royal baby will be called; in the UK it’s just known as ‘specials betting’.
And you would have thought that an ‘Exacta Box’ bet would require you to be exactly right about the order in which two horses finish first and second; but you’d be wrong. Known in the UK as a reverse forecast, it just means picking the horses coming first and second but where the exact order doesn’t matter at all.

Please check our U.S Betting guide and navigate through US and UK betting terms. 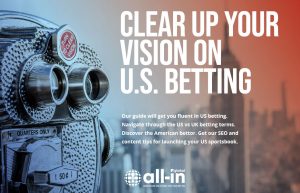 Recent changes to US legislation mean that one of the most valuable markets in the world is finally opening up. Fourteen states have already legalised sports gambling, with plenty more expected to follow suit. Projections have legal bets reaching a quarter of a trillion dollars per year within five years. The state of New Jersey looks set to set the pace: between June 2018 and January 2019, it’s total monthly handle grew from $16.4 m to $385 m.
And that’s even without mentioning the US’ obsession with fantasy sports. Every week some 59 million US and Canadian Fantasy players tear their hair out when their Quarterback gets sacked (taken out by an opposition player rather than dismissed from his job!), their point guard misses a free throw or their chosen pitcher’s throw gets deposited into the stands. These days fantasy sports is a $7.2 billion industry.

The opportunities are therefore plenty but as the old saying goes, the devil is in the detail. If you’re asking an American reader to open an account, make a deposit or do something else you want them to, you’re going to have to go the extra mile by talking to them in their language.
Which of course is what localisation is. Or localization, if we were talking to an American.
That could be anything from using different spellings, to making use of special terminology, to introducing specific cultural references to engage with an audience in a way that’s tailor-made for them.
So the next time you’re writing about football to an American audience, you’ll instantly need to remember that for them it’s ‘soccer’. If the match ends goalless it’s ‘zero-zero’ not nil-nil, a shot on target is ‘on the frame’ and as far as they’re concerned, a clean sheet is what comes out of the wash on a Monday, not preventing the opposition from scoring. That would be a ‘shut-out’, in their world.

That will be the same whether your audience is American, Australian, New Zealander or South African. It’s up to us to speak to your audience in a way that they feel comfortable with and which engages them, wherever it is on the globe that they’re from. It’s not for nothing that we’re All-in Global.
And to use an expression that actually originates from the US, it won’t cost you an arm and a leg. Adapting an existing text to a particular market is something we can do swiftly and at a good value price for our clients.
Finally, it’s also not for nothing that our vendors from around the world have unique skills when it comes to communicating with whatever audience you need to. Whatever your audience calls a football kit, a multiple bet or a deposit bonus, we’ll have someone on board who calls it that too. You can also count on us for

translations, localisations, SEO advice and even making videos for you.
All tailor-made to your reader’s preferences and needs, like a new suit.