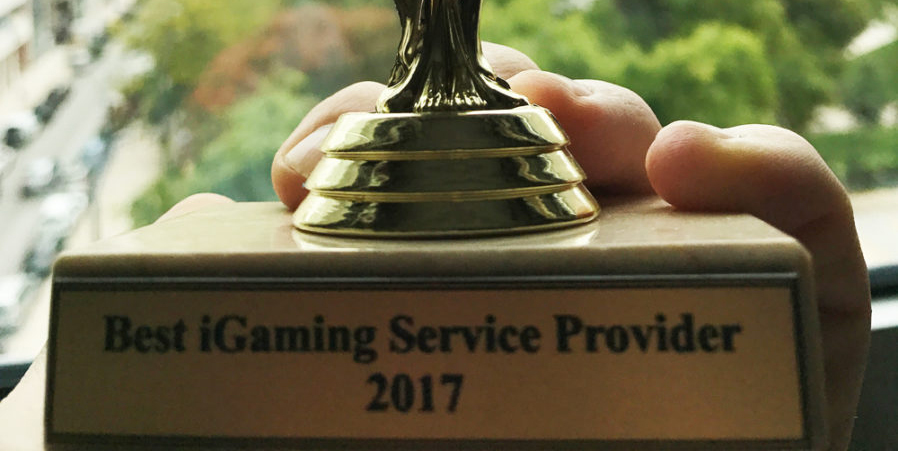 Awards are an important part of the gaming industry. All-in Translations have been picked as a finalist or shortlisted for three of them in the past (and one in the future):

These awards were all decided by judging panels. However the Central and Eastern European Gaming Conference (CEEGC) Award, which was held in Budapest last week, took a different approach. The finalists here were chosen by number of votes they received online, whereas the actual awards were given to the companies with the most votes by the 100+ delegates attending the event.
One representative from each company had only two minutes to persuade the audience that their business is worthy of the top prize. Afterwards, the delegates submitted their votes.
CEO of All-in Translations, Roy Pedersen, focused his pitch on two essential aspects:
1. How the company is helping gaming companies “get their global growing going”.
2. The company’s significant contributions within the gaming community.
“As you probably guessed from the name, our company provides language services for the gaming industry. We were the first company to realise that one needs to understand gaming and its lingo in order to produce a good translation or a text within this field. Now we have almost 300 gaming clients scattered all over the globe, and we’re helping them with localization and content writing into more than 70 languages. The feedback we are getting is overwhelming..
A core element of our marketing strategy is hosting events for the gaming community. To mention a few examples:

I think a lot of people in the industry appreciate us both as a language service provider and as a community contributor”, Pedersen told the audience at the Kempinsky Hotel Corvinus.

It seems he wasn’t wrong. When the winners were announced by Mr. Dan Iliovici and Ms. Julia Peeva, All-in Translations was called to the stage. But Pedersen was nowhere to be found! Rumors spread quickly that one of the local delegates had introduced him to pálinka at the networking party and that the local spirits got the better of him. Luckily, Assaf Stieglitz of odds1x2.com, a client and good friend of the All-in Translations crew, was present at the ceremony. He accepted the award, announcing that Pedersen was “missing in action”.

12 miscalls and two hours later, Pedersen showed up in the hotel lobby to receive the award from Zoltan Tundik and Betty Hathor of EEG Events. Operations Manager at All-in Translations, Tiago Aprigio, was quick as the proverbial champagne cork and wrote an enthusiastic Thank You speech on Pedersen’s behalf: So what;s next for us? All-in Translations was recently named as a finalist for Best Business Serving Football at the Football Business Awards in London early November.
Here you can see our company history (till 2015). It will get updated for our upcoming new website, and one of the new highlights will definitely be the CEEGC Award.
Now to sum it up: in order for us to win an award, we needed the people to be heard, and we needed the word “corporate” to be removed from the award category.
Thanks for the bulk of votes guys, you magnificent bastards!