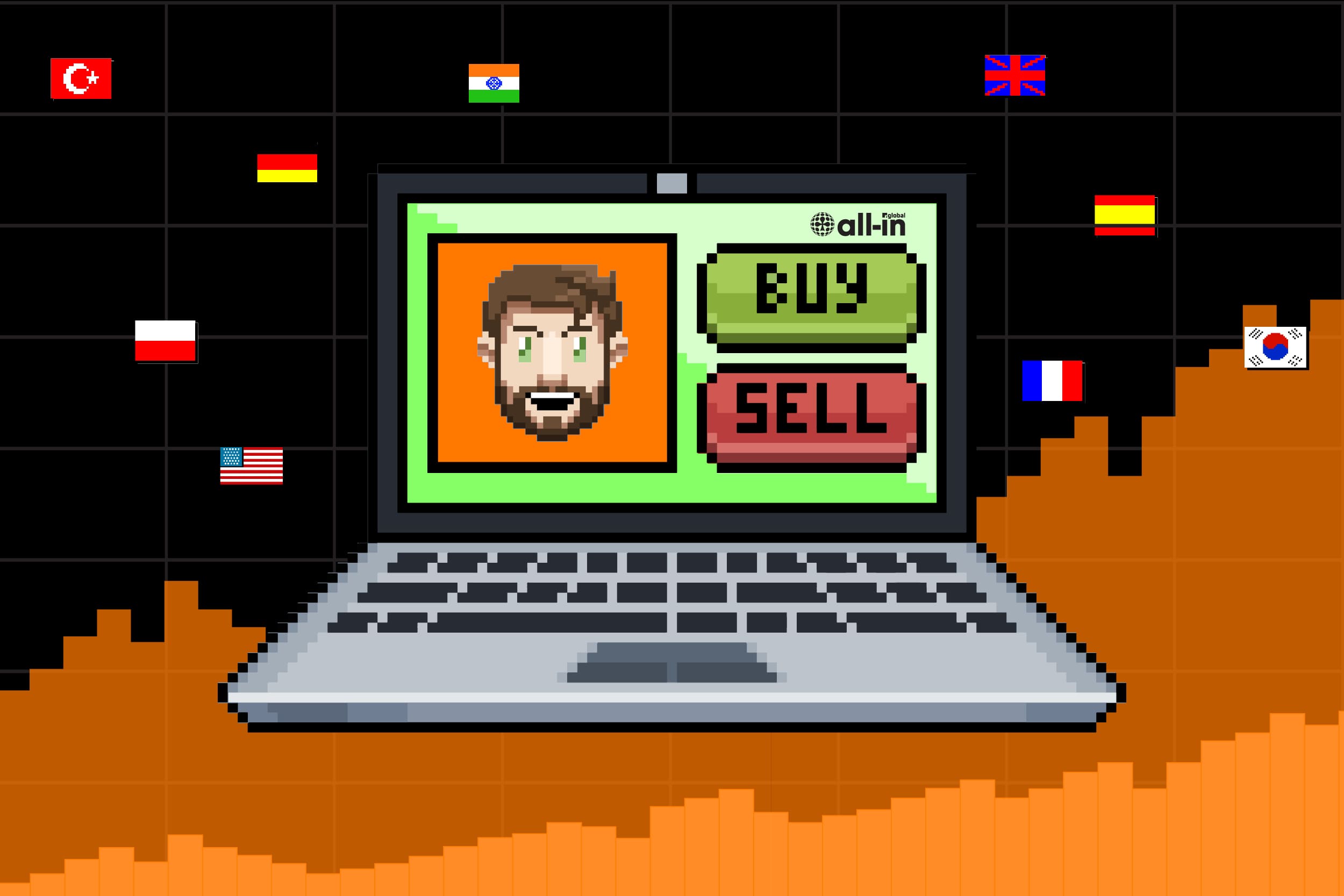 DECRYPTING THE LANGUAGES OF CRYPTO: WHY LOCALIZATION MATTERS

Blockchains are distributed databases and, like these databases, the languages of crypto, and the people who speak them, are diverse. As such, you can’t view the industry, or crypto content, through a single lens.

The Most Influential People in Crypto

Because there isn’t a single point of control within the blockchain world, ideas, products, and services need to be universal. This creates the need for localization across all areas. Indeed, if you’re going to create a global product, it needs to be distributed and disseminated across the network. That’s where languages and localization come in. In turn, that’s why the origins of crypto’s influential figures is important. As purveyors of all things interesting and innovative, we’ve scoured industry’s distributed database of leading figures. By shining a light on each node, we’ll show you why crypto is a global market and why being a polyglot is essential. So, who are these blockchain ballers and what languages do they speak.

Let’s be clear, our list of blockchain ballers isn’t complete. They are some of the top names in the industry, but there are many more. However, we’ve highlighted these seven people specifically because they show just how diverse crypto is. As well as having unique backgrounds and skills, they all speak different languages. Of course, English is the dominant language in the tech world, even if it’s not someone’s native tongue. The important point here though is that it’s not the only language of crypto.

The Rise of Eastern Europe

Some of the most influential people in this space speak something other than English. For example, Kris Marszalek of Crypto.com is Polish. That puts Poland on the map and, therefore, Polish high up on the list of languages spoken in the community. Now, you’re probably wondering why one man alone can raise the Polish flag. We’ll let our fintech expert, Matthew Glowacki, explain: “Crypto.com is the exchange that I use most often to buy, sell and store cryptocurrencies. The mobile app is extremely user-friendly and its native CRO token possesses useful utility and has yielded excellent returns. Crytpto.com is the fastest growing exchange due to their impressive sponsorship portfolio, which includes deals with Formula 1, the NBA, and the UFC. I believe it’s only a matter of time before Crypto.com is the world’s largest exchange.”

If Crypto.com becomes the top exchange in the world then its CEO, Marszalek, automatically becomes one of the industry’s leading figures. That, in turn, makes Poland an important node in the world’s crypto network. The same goes for Vitalik Buterin. The co-founder of Ethereum is Russian and his presence in the industry has not only spawned a wave of innovations, it’s made Russia a hive of blockchain activity. “Vitalik is a true genius. He is the inventor of the Ethereum Blockchain, and his knowledge surpasses almost everyone in this community. I’m very bullish on Ether, and I’m confident that the Ethereum protocol with reign supreme in the blockchain space,” Matthew Glowacki said. Where Buterin leads, other Russians follow. For example, the co-founder of Chainlink, Sergey Nazarov, is Russian. Then there’s the co-founder of Solana, Anatoly Yakovenko, who is, you’ve guessed it, Russian. This makes Russia and Poland major players in the game. However, Europe’s crypto market speaks many other languages. Indeed, you’ve got Alex Dreyfus of Socios and co-founder of The Sandbox, Sebastien Borget, flying the French flag.

From Europe to the World: Crypto’s International Network

Of course, the industry’s nodes aren’t confined to Europe. Cross the digital seas and you’ll find influential figures in Asia, Africa, South America, Central America, and, of course, North America. We all know who Elon Musk is and, while some may balk at his presence in the industry, people listen to what he has to say. “Opinions are divided on Elon Musk in the crypto community. Is he the crypto savior who can usher in mass adoption? Or is he a crypto villain attempting to manipulate the markets for personal gain? Elon has certainly brought a lot of attention to Bitcoin and Doge through his social media posts, so I’m optimistic about his influence in the blockchain community,” said Matthew Glowacki.

Musk might speak English but he’s a South African living in the US. Again, this shows the diversity of the community. Finally, we can’t forget Spanish speakers like the President of El Salvador, Nayib Bukele, who wants Bitcoin to be the country’s legal currency, or the South Korean CEO of Terraform Labs, Do Kwon. Wherever you land on the globe, there will be someone willing to talk about crypto in their language. In fact, our own data proves this. We create and localize content in dozens of languages across a variety of industries. English is the most requested, but we’re seeing an increasing number of people wanting localized content in the following:

Why are we getting these localization requests? Because it’s important to speak the languages of crypto which, as we’ve explained, is a diverse network of native tongues. Just like a blockchain, there isn’t a central point of control. Yes, English might have slightly more of a presence than other languages, but no single node has all the power. That’s a testament to the influential people in the industry and the decentralized nature of blockchain technology. That’s why localizing content is important and why you need to speak the languages of crypto. And that’s why All-In Global creates crypto content in dozens of dialects. 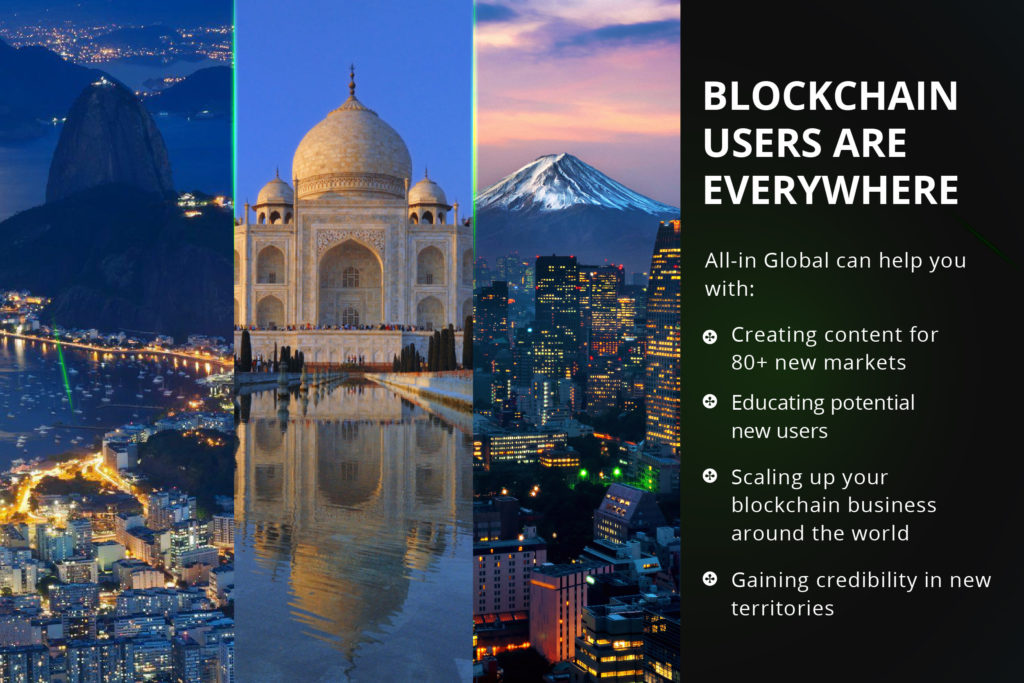