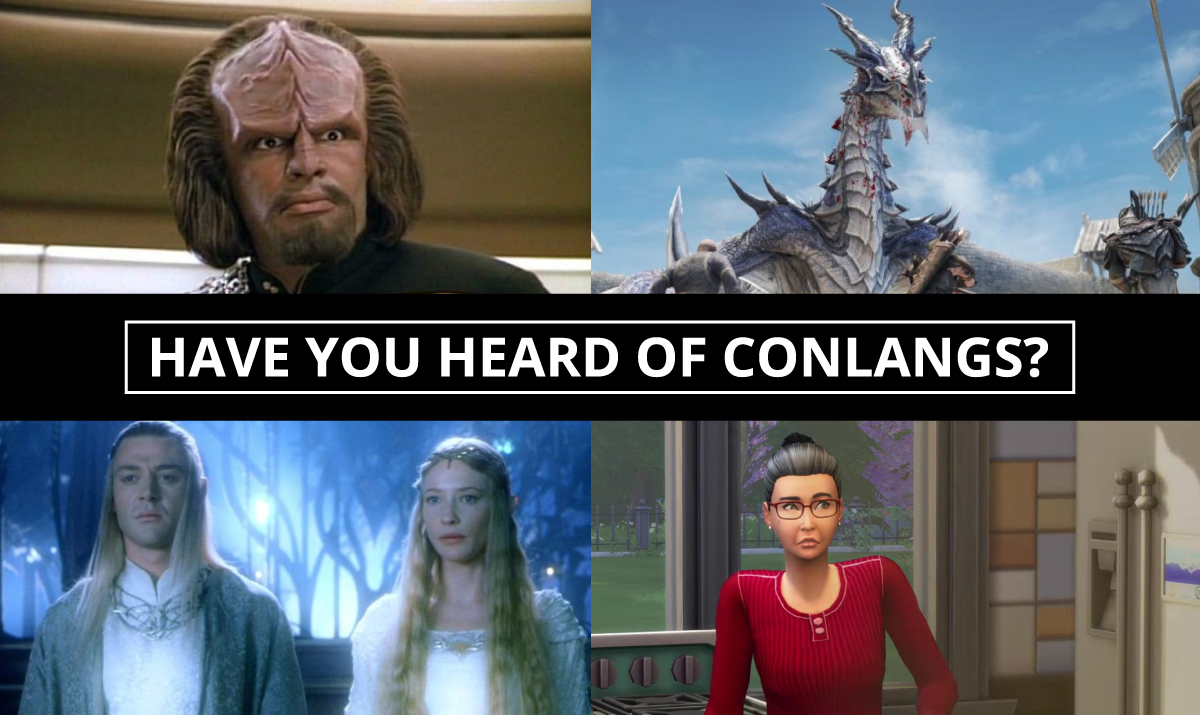 A GAME OF TONGUES? CONLANGS IN USE

Imagine yourself in a bar, after a few drinks your gang gets a bit excited and starts speaking in fictional languages like Elvish, Jabberwocky or some slang Klingon. Would you join in the chinwag or make any sense of what’s being said?

Fictional languages have the power to transport us into different realities by shaping fantasy worlds of words built for books, movies and games. By using them, writers are adding an extra layer of mystery, suspense and even detailed realism in their creations. It might sound quite weird to say that an imaginary language can actually bring realism when you’re crafting a fantasy universe but here’s the logic: there are roughly 7000 languages on Earth (according to Ethnologue) so if everyone speaks English in a movie that takes place 1000 years ago or 1000 years in the future wouldn’t it be quite unrealistic?

What is considered a fictional language?

The term “conlang” – abbreviation for constructed languages” – is the preferred term to describe fictional languages. The main difference between an everyday language and a conlang is that the first is developed in a natural way through many years while all the vocabulary, phonology and grammar of the latter is consciously developed as a work of fiction. If you’re new to the world of conlangs and you want to know more about this topic we suggest the Language Creation Society website: https://conlang.org/ You’ll find precious information and resources on how to create a language for fictional purposes or just for fun.

Once you start digging into the world of fictional languages, you’ll be amazed by the amazing work that some conlang creators put in while creating these new ways of communication. As a language service provider dedicated to the gaming industry we naturally love languages and we want to share with you a list gathering the most popular fictional idioms within the entertainment world – namely the game & cinema industries. Plus the most exciting part is that you can actually learn and speak some of them.

Klingon is a constructed language spoken by Klingons in the Star Trek Universe. Its creator, Marc Okrand, published a book titled “The Klingon Dictionary” in 1985 that sold over 300 000 copies since publication. This book was translated into German, Czech, Italian and Portuguese. Klingon holds the Guinness record for being the most widely used fictional language but the achievements of this conlang don’t stop here. The impact of this language is still so huge that there are Klingon translations of Hamlet, Much Ado About Nothing, Gilgamesh, Art of War, The Wizard of Oz, and The Little Prince. In 2008, the Duolingo app launched a Klingon course after 170 000 Duolingo users have registered their interest in learning the language.

In 1992, through the magic of the Internet, the Klingon Language Institute was found and it claims to provide resources to whoever wants to learn the galaxy’s fastest-growing tongue. Although many Start Trek fans know how to speak a few common phrases, the truth is that 20 people or so in the world are considered fluent in Klingon.

It is known as a guttural language with an alien sonority and reminiscent Arabic, Turkish, Yiddish, Japanese and Native American phonetics combined. When it comes to grammar structures its creator describes it as “pretty simple”. In a phone interview with CNN he said: “The basic grammar is pretty simple, and I’ve seen people pick it up in a couple of hours. The advanced grammar is more complex, but I still think it’s less complex than other languages. Klingon is more tricky than difficult, as it does some things that natural languages don’t tend to do.”

Klingon language is a perfect example of how a fictional language can bring realism to a fantasy world and how in this case it transcended the universe for which it was created and left an indelible mark in the real world. What’s even more fascinating is that Klingon keeps evolving and recently it even added new lingo related to the global pandemic.

There’s a lot to be said about Klingon and if you’re curious to learn more about it you can even use Google search engine in Klingon. Hard to believe? Well… just have a look: https://www.google.com/?hl=xx-klingon

Skyrim players are familiar with the so called “dragon language”. Dovahzul which means “Dragon-Voice” is also known by other names like Draconic, Dragontongue or Dovahtinvaak.
During the game, you can find the language being used by dragons and ancient Nords, written on some walls, in names and songs.

Its grammar is similar to the English one and phonetically it takes on Scandinavian sound systems. Words were developed in a way that when combined can form new words or convey a new idea. A good example of this is the word “moon” that is not present in the Davohzul vocabulary but by combining the words “vulon” (night) and “krein”(sun) we can get the word “vulonkrein” that represents the idea of “moon”.


There’s a website entirely dedicated to teaching how to speak this language https://www.thuum.org/learn/ There you will find all the info you need to learn the dragon language and Skyrim players say that even the basic understanding of this language can change the game experience because it will make you go deep in the story and understand the Skyrim universe in a whole new exciting way.

Quenya is one of the most famous imaginary languages created by J. R. R. Tolkien. It featured prominently in The Lord of the Rings along with Sindarin. In fact, both Quenya and Sindarin are considered functional languages that you can learn and speak.

Quenya translates as “language” and it’s one of the dozens of languages created by Tolkien for the inhabitants of Middle Earth. This fictional language is part of the Elvish language family which gathers over 15 languages and dialects within it. It was influenced specifically by Finnish and grammatical inspiration also comes from Latin and Greek. The phonetic inspiration is attributed to Finnish, Latin, Italian and Spanish. Like many of the Elvish languages, Quenya is written with Tengwar lettering.


What’s more mesmerizing about this language is that its origin goes back to 1910-1915 and it developed with countless revisions that affected grammar and vocabulary until it reached the “definitive” final form called Late Quenya (1950-1972). Since a very young age, Tolkien never stopped experimenting on his constructed languages and he was in fact a master of “real” languages. Throughout his lifetime he studied 35 languages (ancient and modern) and he was so passionate about philology that he created stories to bring those languages to life and not the opposite.

Everyone that played Sims knows the feeling of watching dialogues between the characters and wishing to know what on earth they’re talking about. At first, it sounds like non-sense but in fact it’s quite possible to learn a few words and phrases. It cannot be learned like a traditional language as it doesn’t have a syntax or a well-formed grammar but there are some sounds that are repeated over time which resulted in fan-made translations that evolved into widely accepted communication by the Sims community. There’s a real Simlish Dictionary but is only available to the Sims voice actors.

Luckily one of those voice actors – Krizia Bajos – has a Tiktok account where she shares some priceless linguistic pieces of Simlish.

What is also exciting about Simlish is the whole story behind it. Will Wright, the creator of the Sims, knew that he and his team didn’t want the characters to speak English. They made some tests with Navajo, Ukrainian and Estonian just to find out that since this game is about everyday life, which we all know can get a bit repetitive, it would be quite boring to listen to the characters speaking monotonous dialogues over and over again. That’s why they decided to create a language from scratch. And we can all agree that The Sims wouldn’t be the same without that colorful layer given by their own fictional language.

At All-in Global, everything we do is rooted in a genuine passion for language(s) and we are driven by a strong desire to deliver topnotch services to iGaming, sports betting, sports, esports, and Fintech sectors. We might not have our own conlang (for now!) but we do know how to communicate clearly and attractively with different audiences all around the (known) world. Are you interested in discussing your language business potential with us? Send your message at salesteam@all-in.global.