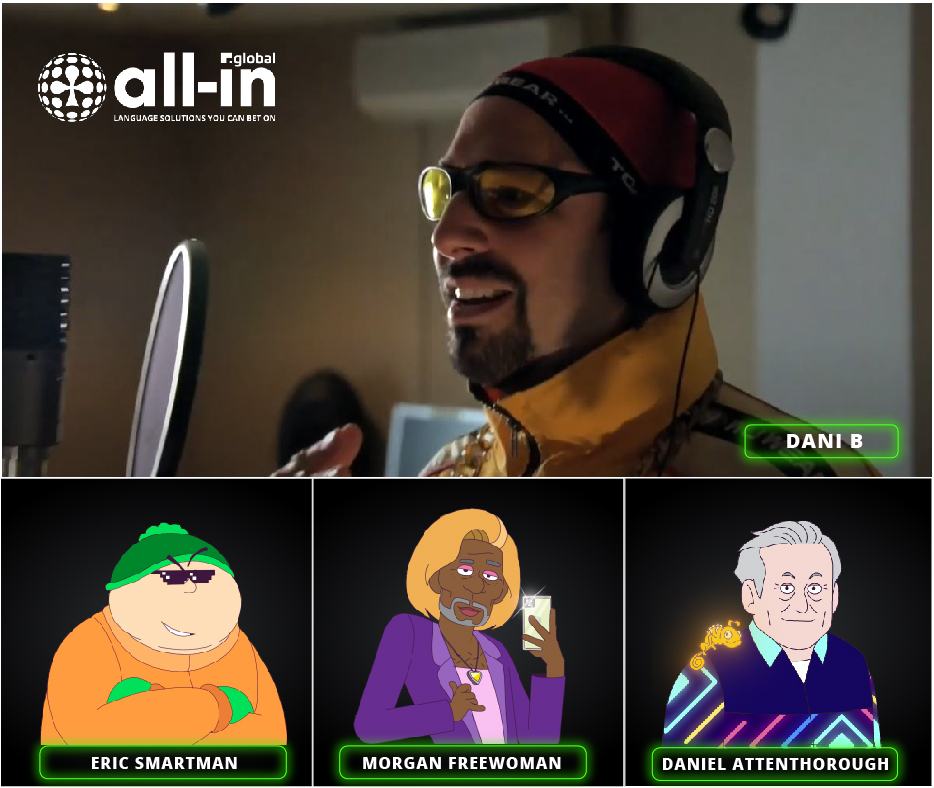 How does one produce video content when everyone is stuck indoors? At All-in Global, we decided to create an interactive set of animated videos, with Dani B (Ali G impersonator) doing most of the voices. The result turned out to be an entertaining way of telling the gaming industry about our new features that make localization easy when you plug in with All-in.

If you have been following All-in Global (formerly known as All-in Translations) for a while now, you know that we are suckers for making videos to promote our language services. With a lot of red zones all over the globe, it was practically impossible to fly out somewhere or fly a filming crew in to shoot “real” videos.

One night I saw an interesting ad in my Facebook feed: a software allowing you to upload many video clips into an interactive platform of videos where the viewer decides the direction of the story. This sounded quite appealing to us because we had different target groups for the new features we had introduced. All of the features, apart from phone interpreting, were designed to make localization easy for gaming professionals, and all features fitted nicely under the campaign tagline: Plug in with All-in.

Once I had the script ready, we hired Andres Felipe Algeciras Marquez (animation) and Angelique Muller (storyboard), and we started looking for the voices fit to give life to each character. This was one of the key elements to turn the project into a big success. We started a wide search and got more than 100 auditions for each character. As many of you know, Dani B is our go-to-guy whenever we choose to make some noise, so we invited him to submit auditions as well, knowing he works as a voice talent too. What we didn’t expect was for Dani B to deliver the best audition for all of the 3 main male characters. We booked a studio and Dani B nailed most of the lines on the first attempt – like the true pro he is.

The interactive video starts with an intro where an cheeky animated version of our CEO Tiago Aprigio presents the four “guides” who have an intro of their own, and then moves to present the different features. My favorite intro is the one of Morgan Freewoman where he encourages the audience to decide where the story goes from there…

The first feature is something we call “drag & drop”. It’s simply a folder which is shared between All-in Global and the client allowing the client to upload files they want to have translated. The file simply pops up in the folder when localization is completed. As Eric Smartman puts it: “No need to send any god damn emails. Nice”.

The 2nd feature is named WordPress integration and enables our clients to connect their WordPress back-end to our translation system, and by doing this, their content and localization management will instantly become way easier. Our character Charlotta Johansson, recommended for karaoke lovers lost in translation, is obviously based on Scarlett from Lost in Translation. She explains how this feature can help her with her plans of opening up a casino affiliate website in Japanese.

The 3rd feature is similar to the 2nd one, but applies to other website development software than WordPress. Our translation system is compatible with the vast majority of systems, including Drupal, Contentstack and Magento. We also offer API integration. When this is set up, you can simply select the pages you need translated and click submit. Our translators will jump on the task right away. If you want, you can follow the progress with live preview. If you watch all the videos, you will notice that we have mentioned an extra feature in the presentation made by Daniel Attenthorough. The idea was that his character would appeal mostly to hardcore developers, and we’ve added Gitlab (Git based repositories) in the list of compatible software.

The last feature is called phone interpretation. Here you can get an interpreter on the phone for almost any language by simply calling a number and inserting the code given to you by salesteam@all-in.global. The phone interpretation videos really showcase the wide range of language services on offer at All-in Global, including interpretation, voice-over and subtitling, all available in more than 70 languages.